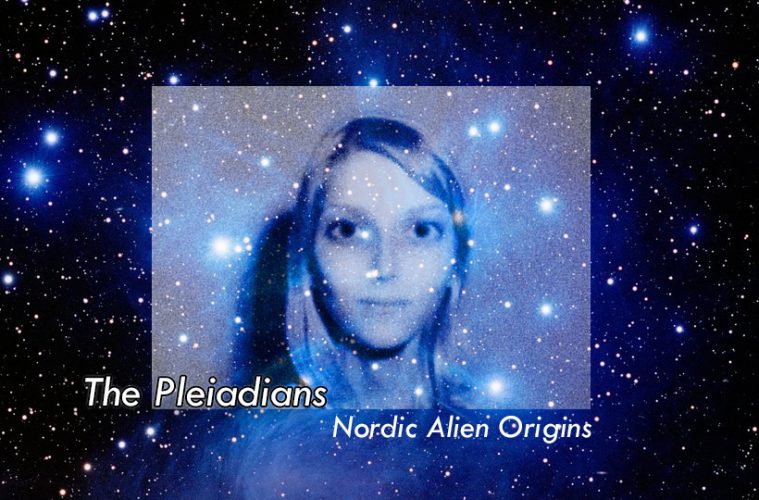 While you are learning about the different species of aliens that are reported to exist, one species you will come across is the Pleiadians, often referred to simply as “Nordic aliens.”

Who exactly are the Pleiadians, and what are their intentions when it comes to Earth? In this article, we’ll talk about where the Pleiadians come from, what their characteristics are, and what they want with regards to us.

Who Are The Pleiadians?

The Pleiadians are aliens from the Pleiades star cluster, referred to sometimes as the “Seven Sisters” and designated as M45.

You’ll find this cluster in the Taurus constellation.

Human beings have long been enthralled with the Pleiades for a couple of reasons. First of all, it is located 444.2 light years from Earth, which makes it our nearest star cluster. Secondly, the star cluster is beautiful to behold, and a favorite of many backyard astronomers.

Many people believe that the Pleiadians are descendents of a species called the Lyrans, who may come from Vega. But nobody seems to be 100% clear on this. It may just be that the Lyrans and Pleiadians have a long association. Still others seem to refer to the two species interchangeably.

It is also believed that the Pleiadians may have some direct link to us, for example, that we may both be descended from Lyrans, and therefore are “brother” species of a sort.

Some people also believe that some (possibly Native Americans), but not all, humans are descended from Pleiadians, who may have spent time on Earth in the past.

Pleiadians are generally described as tall, blonde aliens with very light skin, thus the nickname “Nordic” aliens. Their appearance is more or less Scandinavian, and it generally seems to be agreed that they are very good-looking.

Pleiadians seem to have males and females. They have unusual digestive systems which allow them to expel waste through their pores. The form-fitting clothing they wear can then absorb it and recycle it for other uses. While this species is sometimes reported to be able to consume meat, it seems that they vastly prefer to eat plants.

It is widely believed that the Pleiadians have evolved far beyond us from a spiritual perspective. They are apparently compassionate, friendly, protective entities, and may possess psychic powers.

While many species seem to regard humans with curiosity, the Pleiadians seem to actually care about humanity, likely because we might share a common ancestry among the stars.

Most of what we “know” about the Pleiadians comes from stories from abductees and channelers.

The best-known is probably the Arizona logger Travis Walton.

Travis was the feature of the 90’s film Fire In The Sky (required viewing for any serious UFO researcher) and he who wrote a book of the same title and another called The Walton Experience to document his abduction experience.

It seems much more common to run into claims from channelers to have been in psychic contact with these aliens.

Alas, some of these contactees have been discounted over the years and hurt the credibility of other reports.

One prominent example was author George Adamski, whose name became big in the 1950s.

Since he made his claims (including that Nordic aliens hailed from Mars and Venus), many of them have been thoroughly debunked.

It is quite clear that these are inhospitable environments for a species reportedly so similar to our own.

It is also especially noteworthy that President Eisenhower supposedly met in person with some Nordic aliens at Edwards Air Force Base in February 1954. Apparently, the aliens wanted to motivate us toward nuclear disarmament with a gift of technology.

As the story goes, Eisenhower didn’t care for the prospect of giving up the nukes, so he instead made a deal with the grays, who agreed to give us the tech in exchange for free and open access to the American public via abductions, no questions asked.  This was known as the Greada Treaty.

Did any of this actually take place? Who knows? If it did, we’ll probably never find out.

Histories regarding the relationship and contact between Pleiadians and humans vary depending on who is telling the story, but there is a common theme of past coexistence on Earth.

This source explains, “Around 225,000 B.C., the Pleiadians discovered a small sun system with a planet called Earth on one of their scouting missions away from the Pleiades. They discovered on Earth, three groups of uncivilized people living there. The larger of these groups were light skinned and were of Lyran descent. The Lyrans had landed on Earth earlier and were forced to stay on Earth and enter into a incarnational cycle, because of their ill treatment of the original brown skinned natives. This became their karma. At this time, the Pleiadians decided to stay and create societies on Earth.”

As you might guess, during this temporary period of stewardship, many of the advances humanity made could be attributed in part to the intervention of the Pleiadians. Perhaps the Pleiadians were mistaken for other humans, or perhaps they were seen as gods.

And in some cases, it is possible that Pleiadians were viewed as human beings and gods.

The Pleiadians And Jesus

Some people believe that the Pleiadians decided to take off around 10 AD, but before they did, they conferred an alien spiritual leader upon Earth whom they named Jmmanuel.

As you might already have guessed, we ended up calling Jmmanuel “Jesus.”

This would perhaps explain why Jesus appears to be white in so many depictions of the man.

Although, it is far more likely that this simply reflects the racial assumptions of white Christians in today’s world.

Regardless, the Pleiades have played an important role in many mythologies around the world, including among the Greeks, Scandinavians, Indigenous North Americans, and others.

You can find a nice overview of these myths On Gaia here.

Indeed, the more modern belief in Nordic aliens could be considered part of the same myth cycle.

So, now you know more about the possible history that humanity and the Nordic aliens may have shared. You also have learned about how some people claim to have been contacted by the Pleiadians over past decades.

But what about the future? Will we ever see the Pleiadians again? Have they left us here to languish indefinitely, or are they coming back for us when the time is right?

Well, that too depends on who you ask. But it does seem like most believers expect an interstellar family reunion at some point in the future, once we have grown up and are ready to “leave the nest” with our Space Brothers.

Alas, according to some versions of the story, that already was supposed to have happened.

From the same overview quoted previously regarding our shared history, here were some predictions about the then-future:

“When we are in The 5th dimension by year 2012, the Pleiadians will bring in Mother Ships to help the survivors of Earth with food and temporary shelter. They have the technology to grow food immediately on their Mother Ships by using special soil and seeds. The plants grow immediately to full maturity. So people of earth, do not despair, help will be there when you need it. All you have to do for now is keep your body frequency to one of Love, so you can ascend to the fifth dimension by year 2002. You will then become part of the new civilization of light on a planet of light. See you all at the Cosmic Party in the year 2012!”

… Ouch, right? 2012 has come and gone. No Cosmic Party. No Space Brothers welcoming us into an era of peace and light. No 5th dimension.

Instead, as I am writing this, where do we find ourselves today?

Let’s see, we’ve got coronavirus sweeping the globe, half of Australia on fire, authoritarianism on the rise around the world, an insane wealth divide between the rich and the poor, and climate change literally killing our ecology.

Does this mean that the Nordic aliens aren’t real? Not necessarily. But 2012 came and went, and it is pretty clear they aren’t going to save us.

I am a big believer in a couple of things. One is that it is nigh impossible to prove a lot of things are or are not real. But the other is that the stories we tell each other and the mythologies we share have undeniable truths within them. Through them, we are able to confront who we are today and envision who we could be tomorrow.

Why do we dream about our brother aliens from beyond the stars watching over us, guiding us through stewardship through the early years of our civilization, and returning to welcome us into an era of peace and harmony in the future?

It is because we need that dream. Our world is on fire. We are not living in an era of peace and harmony. And most of us have a hard time seeing past the ends of our own noses, much less belonging to a compassionate interstellar family.

But we need a little hope. We need something to strive for. Whether or not the Pleiadians are out there, we belong to a universe which is bigger than the lines we draw on a map. And if we want to be worthy to join our brothers among the stars, that means starting by embracing our brothers and sisters here on Earth. Whether you believe in the Pleiadians or not, let’s walk forward together into a brighter future, one where we become loving stewards of our planet and our cosmic family.