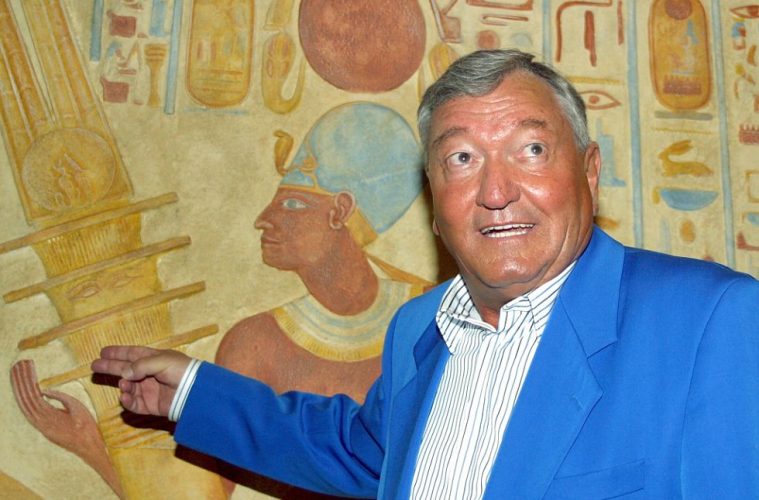 If you are fascinated by the theory that ancient astronauts from the stars have visited Earth at times in the past, one name that you will come across during your research time and again is Erich Von Däniken. Just who is Erich Von Däniken, and what did he have to say about extraterrestrial influence on human development?

The Author Who Brought the Ancient Astronaut Hypothesis to Prominence

Erich Von Däniken is a Swiss writer born in 1935 who became interested in his school days in the possibility that aliens had visited Earth and played a key role in human development.

He is most famous for his book Chariots of the Gods?, originally named Erinnerungen an die Zukunft in German, which translates to “Memories of the Future.”

That first book was published in 1969 by Souvenir Press Ltd. Since then, he has published more than a dozen other books on the same topics. In fact, he is still active, having published The Gods Never Left Us in 2018.

Our focus in this article will be on Däniken’s claims and ideas rather than being a biography. That being said, he lived a colorful life to say the least. If you become interested in him, you should definitely look up more about his misadventures, including sentences for theft, fraud, and embezzlement.

What Does Von Däniken Claim About Alien Involvement with Earth?

Von Däniken said that ancient astronauts from other planets traveled to Earth earlier in our history.

These alien visitors were interpreted as gods by human beings, who at the time, had no other point of reference for describing them.

Here are some of his specific claims:

These claims give you a pretty good idea for the types of beliefs that Von Däniken has promoted through his works.

The artifacts which he talks about can be broadly referred to as “out-of-place artifacts,” sometimes abbreviated as OOPArts.

Along with Von Däniken, some other authors who have written about OOPArts include Charles Fort, Peter Kolosimo, Graham Hancock and others.

Von Däniken is not the only person to espouse theories about ancient astronauts. But he is one of the most famous names in this field.

Indeed, perhaps his renown (or infamy, depending on what circles you travel in) is what makes him most noteworthy

A number of his books went on to become bestsellers. The public was immediately taken with his work in the imaginative and unusual theories put forth.

For many readers turning the pages of Chariots of the Gods for the first time, the concept of ancient astronauts was brand-new and utterly mind-blowing.

His books have remained popular over the decades since he launched his career. As of the start of 2017, more than 70 million Von Däniken books have been sold worldwide.

That being said, academics have been swift to take turns at debunking his work.

Indeed, some of the books written to refute his claims have also gone on to become bestsellers, for example, Crash Go The Chariots by Clifford Wilson.

At least in some respects, Von Däniken has been flexible with regards to his theories.

For instance, he wrote about an iron pillar in India with zero rust on it in Chariots of the Gods, claiming it could only be made with alien technology.

Since that time, however, he has changed his mind about the pillar, and states that it is man-made. Indeed, slag inclusions in the pillar account for why it has almost no rust on it.

Reading Von Däniken without context can be exciting, and definitely a mind-opening experience. But alas, it should be noted that Von Däniken was not the most trustworthy of writers.

For example, Von Däniken claimed in The Gold of the Gods to have been inside a mysterious library within man-made tunnels in the natural caves of Cueva de los Tayos in Ecuador.

But the very guide he supposedly hired, Juan Moricz, claimed the journey into the tunnels with Von Däniken never even occurred.

At first, he came up with elaborate lies to cover his tracks and try to explain away the conflicting account. But eventually, he came clean and said he made up the whole thing.

There is really no dancing around the fact that Erich Von Däniken was has not always been 100% honest.  If you read his books, you have to take what he writes with a grain of salt at times but that does not mean they do not have value.

But there are two good reasons to delve into his works.

First of all, Von Däniken’s place in history is undeniable. By reading his books, you gain insights into how the ancient astronaut theory took off with the public.

You’ll notice his theories have influenced a lot of people, including researchers, filmmakers, and others.

The other reason to read Von Däniken is simply for the sheer delight in doing so.

I don’t want to focus on myself much, but I discovered Chariots of the Gods when I was maybe 11 years old.

At the time, I had never heard about ancient astronauts. Reading the book opened up an entire new world to me, and taught me a very important life skill: how to question my assumptions.

While I was disappointed to learn later about Däniken’s tendency to exaggerate the truth or outright deceit, by then, I had already moved into the broader world of theories about alien visitors to Earth.

So, I suppose you could say that I can thank Däniken for opening my mind while attempting to close my eyes.

My recommendation to you is to keep your mind and your eyes open. Think critically, question assumptions, and look for the truth. Däniken may not have found it, but frankly, neither have numerous mainstream researchers investigating OOPArts. It is still out there, waiting to be discovered.

What Erich Von Däniken Books Should You Read to Learn More?

If you are interested in exploring the works of Erich Von Däniken, the most important book to add to your reading list is 1969’s Chariots of the Gods. By now, this book is something of a legend.


Other popular titles include The Gold of the Gods, Gods From Outer Space, The Gods Never Left Us, and History Is Wrong. If you enjoy those, you’ll find plenty more to read before you exhaust his catalog of works.

Now you know who Erich Von Däniken is and how his theories fit into beliefs about ancient astronauts influencing human development.

Being as many of Von Däniken’s claims have been disputed, it is best not to take his specific claims too seriously.

Nevertheless, Von Däniken has opened a window to a larger universe for millions of readers who would otherwise never have discovered the theory of ancient astronauts. For that reason, his works will always hold a place of distinction.

We encourage you to read Erich Von Däniken if you are interested in his works, and then continue exploring our site to move beyond Von Däniken to discover superior resources on ancient astronauts.